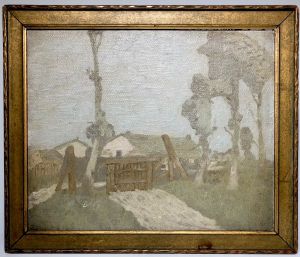 [From the Community Collection, a public trust in Agincourt, Iowa]

Son of landscape painter Walter Clark and Jennifer Woodruff Clark, a student of psychic phenomena, Eliot Clark was a precocious artist who became a landscape painter in the late American Impressionist style.  Moving to Albemarle, Virginia in 1932, he was one of the few Impressionist* artists of the Southern states.  Likely this was a result of his association with James Whistler and his painting in 1900 at Gloucester, Massachusetts with John Twachtman, a family friend.  Showing his obvious interest in Impressionism, he wrote a book about its exponents including Twachtman, Theodore Robinson, Childe Hassam, Julian Weir, and Robert Vonnoh.

The lesser known Clark is in the good company of early giants in the American Impressionist style, John Henry Twachtman and Childe Hassam — though artists of that calibre are collected by major urban institutions.