The German-American Mutual Insurance Co. maintained office in Fargo from 1892. They built their own facility, “Hansa House”, at 10 North Broad Street five years later, with income producing rental space on the ground floor (occupied for several years by a company that sold pianos and other musican instruments) as well as on the third floor. The top floor was reserved for a lodge meeting room which could be used for other events–though those three flights of narros stairs were an effort for our older citizens. For some time, it was the headquarters of a men’s singing froup and eventually the Commercial Club called it home, as well. 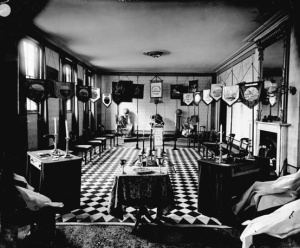 It’s tempting to write the history of a major business like the G-A, but that would require me to actually believe in capitalism. As an undergraduate, I took ECON 151 and failed miserably to understand the whole “Guns and Butter” analogy. The building, on the other hand, has already been designed, and I can imagine the lodge meeting space-cum-auditorium-banquet facility and lot more readily.

Lodges were important social settings in towns like Agincourt. Membership in the AF&AM Masonic Lodge, the BPOE, or any of the other “animal” societies was a necessity for business purposes. In the midst of all that mumbo-jumbo and brotherhood, deals were done, marriages made, horses traded, and the like. If you had a business on “Main Street”, fraternal membership was a must. What actually went on in the room as ritual eventually leaked out and became common knowledge. But for yourger members it enjoyed a vague mystique. The Masons, incidentally, had their own building across the street; it burned in 1912 and provided the building site for Agincourt’s new public library.

That fourth floor meeting room hosted the monthly Commercial Club dinner in 1895 when Mayor Ed Flynn clutched his chest, fell face-first into a place of sauerbraten, and died—testily. Hizzonner was of a substantial girth and negotiating his corpulence down three flights was a tale told for several weeks around the fire house.