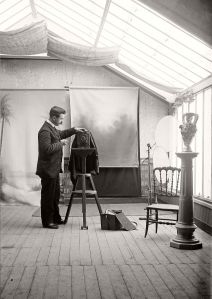 “The eye should learn to listen before it looks.”
― Robert Frank

Agincourt has needed a photographer almost from the beginning. And try as I might to interest an actual photographer in helping create one, none were forthcoming. In one case, I got the impression he was offended. Ah, well.

I tackled the easy part several years ago, placing a photographer’s studio on a north-facing second floor, above Van Kannel’s Sanitary Drug, at the corner of Broad and James. I’ll bet you’ve walked past it several times but failed to look up and admire the enormous skylight — still in place, though the studio has been vacant for years. Now I “simply” have to populate the space with a professional.

Through the second half of the 19th century, every community of even modest size enjoyed the services of a wet-plate photographer. Posed, studio photographs were the norm, largely, I guess, because the apparatus for taking images was so cumbersome. There was also an inordinate amount of paraphernalia—tables, chairs, chaises longues, easels, trunks, vases and urns, brackets and shelves, etc., and a variety of theatrical backdrops, curtains, carpets, tapestries, and drapery. The photographer might even have provided costumes of humorous or patriotic sorts. I can’t even imagine the amount of time required for a typical session, the number of poses and images taken.

The studio above—the “busman’s holiday” when the photographer is the subject—is the simplest I could find; the most modest and, in my mind’s eye, at least, more likely to represent a 19th century photographic studio in the American Midwest.

I consulted a list of well-known American photographers, the sort of compendium Wikipedia enjoys, and wasn’t at all surprised to note how few names were obviously women. Which is all that’s required to set my mind in motion: Agincourt’s resident photographer will be a woman. And for some reason her surname will be Sullivan, known to her friends as “Sully” and perhaps unmarried. In 1901, the Ladies Home Journal featured six women as “The Foremost Women Photographers in America”, though I haven’t seen the actual article. I do know that one of them was Zaida Ben-Yusuf. The field has opened considerably since then; one website has put together a list of twenty-one “you need to know”. Which makes me proud that Ms Sullivan was a pioneer in her profession.

What kinds of stories do you suppose might grow from such simple circumstances? 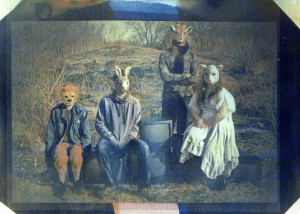 Like Loading...
By agincourtiowa in Uncategorized on Tuesday/16/July/2019.
← Henry Humphrey Moore [1844-1926] “Whatever the cost of our libraries, the price is cheap compared to that of an ignorant nation.” ― Walter Cronkite →