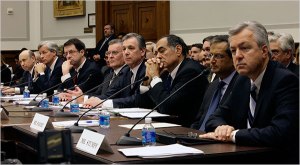 If, as Louis Sullivan suggests, form follows function, what should be the image of a bank? An unnamed on-line banking firm is promoting banks so user-friendly that they resemble Starbucks. Which certainly seems at odds with the recent grilling of major bank CEOs before the Senate Banking Committee, as clueless a bunch of hypocrites as can be herded into the same room these days—though I’m not certain now that I mean the bankers or the senators. Be that as it may, let’s consider the archetypical image of Main Street financial institutions during the last 150 years. Agincourt’s got one of them right now: the 1908 Farmers+Mechanics+Merchants Bank at #2 North Broad Street.

When considering the imagery of an early 20th century bank—in an era shortly before the dominance of large financial institutions, corporately owned, and responsible to shareholders rather than actual depositors—I opted for the stability of Classical Revivalism. [Besides, it was an opportunity for me to tangle with a unfamilliar stylistic vocabulary.] So the typical entry dominating what real estate agents call “100% Corner” would anchor the block just across the street from the new Agincourt Public Library—just 100 feet and seven years apart, but as stylistically distant as possible from each other. Had I taken more time to consider the issue, I might have gone another way. Consider, for example, the unbuilt Security Bank in Minneapolis, a design from the office of L. S. Buffington but from the hand of Harvey Ellis.

The Buffington/Ellis design achieves the conservative stability of Neo-Classicism, but without all those fussy (and costly) Orders. With a design date of 1891, it’s tempting to link it with contemporary European Art Nouveau, rather than the prevailing Classicism that would dominate the Chicago World’s Fair just two years later. But I suspect there may be a deeper meaning to the Security’s domed box, something drawn from the innate thrift of 19th century small-town Midwesterners. 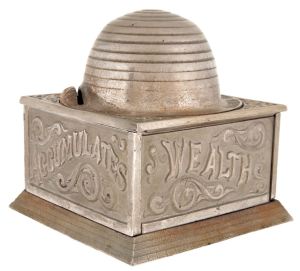 Consider the industrious bee, who puts away for hard times what can be harvested in plenty. More than one small town bank promoted such thrift in young people through the mechanical bank, usually embossed with its own name as a promotional tool. Frankly I’d rather have one of these, than a toaster oven. Do you imagine Harvery Ellis had this in mind as he sketched the Security Bank?

There were a host of memes and metaphors to draw from, some of which I found on eBay this afternoon among the real-photo postcards offered there for sale to collectors like myself. Consider these as models: 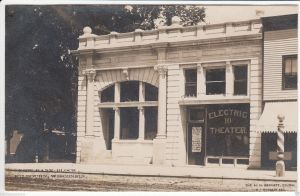 Bank, Lidgerwood, ND / Those granite columns came from Vermont, but were they worth the cost? My grandmother would have called them “dust catchers” and banished them to the land fill.

Bank, North Brookfield, MA / The Richardsonian was popular in the Midwest, too, but these look too much like legos. 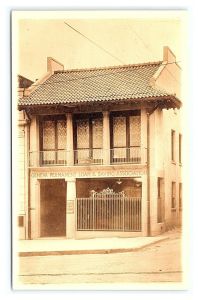 Bank, Geneva, NY / Of all in this group, I’m fondest of the delicacy of a design I’d classify as “Edwardian”.