Home » Uncategorized » J. Sterling Morton and all that

J. Sterling Morton and all that 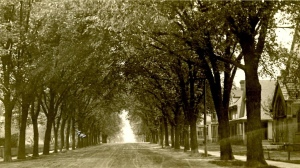 J. Sterling Morton is hardly a household name. I recognize it because there is a suburban Chicago high school named for him; we played against them and customarily lost. There is also the Morton Wing of the Chicago Art Institute. But a much better clue to his identity is a little farther west: the Morton Arboretum in DuPage County (which I must confess is toward the bottom of my bucket list but things change). My guess is you’ve used one of his products, perhaps even today, when you picked up a salt shaker, because Morton’s millions were made from the production of common table salt. 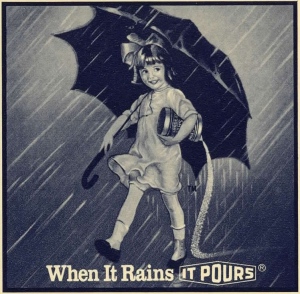 Why the Morton family are connected with Arbor Day I don’t know, but I somehow knew even as a grade school kid that they were.

Growing up in Bedford Park I came to appreciate trees. Not just West 65th Place, but the entire suburb of Bedford Park profited from the very phenomenon J. Sterling believed in—the planting of trees. For my village was a textbook example of modest residential streets ennobled by mature rows of stately elms and maples, cathedrals of green, American allées worthy of a Vaux-le-Vicomte at their end. This was the age before Dutch Elm denuded middle America, so my memories of sultry summer nights playing “Kick the Can” or catching fireflies in mayonnaise jars are among the happiest of what was for me an unhappy time.

Besides lightening bugs, which have practically disappeared, there were also the cycles of cicadas, an odd-numbered rhythm of years when the woke from their slumber long enough to mate and leave larvae for an equal length of time. But for that brief encounter, a matter of just a few days, they made a holy racket as soon as the sun had set. If you’ve missed one of those unofficial festivals of life, I can’t quite do it justice. But recollection encourages me to recreate that setting, sacred to me, in Agincourt.

It’s surprising how many real-photo postcards there are of those very streets of my youth. Even in their black-and-whiteness I can be transported to the late 1950s, the happier age of Dwight Eisenhower, when the future looked so hopeful to a twelve-year-old anxious to watch it unfold. RPPCs (“real-photo postcards”) are often far more expensive than their lithographed cousins. Why? Because there could very well be just the one in your hand or on your computer screen. RPPCs weren’t necessarily mass produced; they depended on nothing more than you, your camera, and a darkroom to print that image which had momentarily seemed so worthy of being recorded. If I’d been an amateur photographer, I might have created some myself. 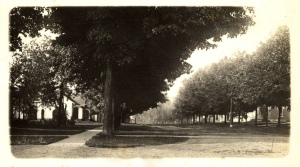 Looking at one of these, my reaction is always the same: I hear Samuel Barber’s “Summer Music” in my mind’s ear, and I recall the text of James Agee’s prose poem “Knoxville: Summer of 1915”, which was itself also partially set to music by Barber. Let yourself be transported to a simpler time by this fragment:

“The noise of the locust is dry, and it seems not to be rasped or vibrated but urged from him as if through a small orifice by a breath that can never give out. Also there is never one locust but an illusion of at least a thousand. The noise of each locust is pitched in some classic locust range out of which none of them varies more than two full tones: and yet you seem to hear each locust discrete from all the rest, and there is a long, slow, pulse in their noise, like the scarcely defined arch of a long and high set bridge. They are all around in every tree, so that the noise seems to come from nowhere and everywhere at once, from the whole shell of heaven, shivering in your flesh and teasing your eardrums, the boldest of all the sounds of night. And yet it is habitual to summer nights, and is of the great order of noises, like the noises of the sea and of the blood of her precocious grandchild, which you realize you are hearing only when you catch yourself listening.”