Five years ago on election eve, Howard couldn’t stand the suspense. I can identify. So I thought you might enjoy the column he wrote for the Saturday following, November 8th, 2008 and this one published two weeks after that, on November 22nd. It concerns the woman on this Canadian $100 bill—not an actual bill, but one of a series proposing better representation of women.

“A few figs from thistles…”

by Howard A. Tabor

My election eve dog-walking two weeks ago took Digger and me past St Joe’s. Choir practice lured us in for a few unseen minutes in a back pew.

Gerry Leiden was rehearsing the choir for a performance of his oratorio “Shananditti”, an exceptional yet all too common story of the earliest encounters of Native North American people with the first European colonists. Indigenous people were ill-equipped for diseases to which Europeans carried immunity. Common childhood diseases like measles decimated entire tribes. Among those were the Beothuk of maritime Canada: Newfoundland and Labrador, whose last surviving member Shananditti died in 1829.

Three women—Shananditti, her mother and sister—were captured in 1823, but two of them quickly died. Coming eventually into the household of a sympathetic listener, W.E. Cormack made a list of Beothuk vocabulary which, with two other lists, has been compiled into a single source, last surviving evidence of a lost people.  What survives is one master wordlist of 325 glosses plus twenty-one numerals and the names of months.

The extinction a language (like Cornish, for example, in the southeast of England) is a sad and reflective moment for humankind, for there surely are concepts that cannot be expressed in any other way. But the disappearance of an entire people is cause for mourning of a different kind. Leiden’s oratorio (“a large-scale musical work for orchestra and voices, typically a narrative on a religious theme, performed without the use of costumes, scenery, or action“) consists entirely of Beothuk words — a syllabary — their world rendered through the rhythms of speech; a language not heard for nearly two hundred years.

If my recollection of Musicology 101 still serves, Czech composer Leoš Janáček would not allow his operas to be translated into other languages, believing that the spirit of his culture was as clearly expressed in its language—the rhythms and sonority of its speech—as in any other art form. So Gerry Leiden has used words of a dead people to bring them to life again, even if for only an hour. Please reserve either next Friday or Saturday evening, December 5th and 6th, for the premier performances of “Shananditti” at Saint-Joseph-the-Carpenter Episcopal church. You’ll be rewarded.

PS: Seating is limited, so get your tickets early. 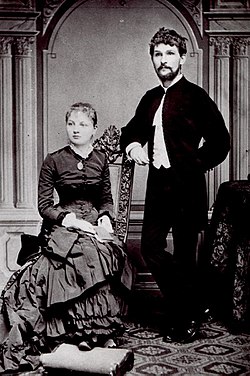 Janáček with his wife Zdenka, in 1881

Like Loading...
By agincourtiowa in A few figs from thistles, Uncategorized on Tuesday/03/April/2018.
← Trickle-down Urbanism How Cities Happen(ed) →