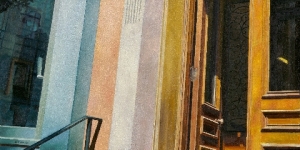 This small commercial building at 12 NE James Avenue began its life in the 1880s, though its most famous occupant was the dress shop of Grace Arbogast. After graduation from Agincourt High School, she traveled east, first to Chicago and then to New York, where she found work in millinery and eventually as an apprentice stitcher in the garment industry. By the age of twenty-five, Arbogast had introduced her own design label—”Grace”—and attracted an Upper East Side clientele. In the late 20s, Arbogast returned to her hometown, renovated the shop on NE James and employed many local girls and young women in the production of high fashion design. “Open Door” is a fragment of that shop front.

With a BA in graphic design from Iowa State University in 1984, Twin Cities artist Mike Welton began his career in graphic design. A lack of creative outlet combined with travel to other Midwestern “Rust Belt” cities exposed him to the rich design heritage of 19th and 20th century urbanism—especially signage and the detail of pre-modern architecture. His work groups naturally into three categories: signs, buildings and what he calls “urban extracts”. “Open Door” is one of those extracts, showing a fragment of the building as it is, with subtle details that can only be appreciated at a pedestrian speed and scale. But the ghostly manequins not seen in its windows since Arbogast retired in the 1950s are spectral hints that the past is always with us.